Showing posts from June, 2020
Show all

How To: Be Productive During The Summer!!

June 17, 2020
Hey guys!! Happy Wednesday!! I am so sorry that I have not posted in a while, but I am back for good! I am so excited because today is a How To day!! I completely forgot to give y'all a heads up that today would be one in case you wanted to link up, but I will have a link part ready if any of y'all do decide to link up later this week!! If you do want to link up later this week, than all you have to do is post a blog post about How To do something with the photo below in your post. You can add your link to the link party! HERE is the link! Moving on, in summer do y'all just have that constant urge to just sit around the pool all day long? Because if so, I DO TOO! During this summer, I want to be super organized and get myself ready for all that is to come! So today I am sharing ways that I stay productive during the summer!! 1: Make A Checklist For Each Day Guys, this is the main thing that holds me together!! I mean, I cannot finish all of the things I need to do without
1 comment
Read more

June 05, 2020
Hey! This is not the Friday Favorites I said I would be doing, but I realized that that was not what the world needed.  What we do need is love and encouragement. We need prayer and faith.  Above it all, we need to stop being blinded by prejudice and hate. No matter where you are from, the color of your skin, or your beliefs, we are all equal. No person is of greater importance than another.  We all have a voice, and right now we need to speak up and tell the world what needs to be done. I encourage y'all to be the change, and speak up for justice and equality in our world! We are all equal, so lets start acting like it! I also encourage y'all just to pray for everything that is going on.  Love y'all!!  "And it shall come to pass that everyone who calls upon the name of the Lord shall be saved." Acts 2:21 Love Abby !!
Post a Comment
Read more

June 03, 2020
Hey guys!! It is Wednesday, the third of June! It feels like May just flew by!! So, I had mentioned on  Friday and Monday about a little surprise that I had for y'all, and yes...we got a kitten!!  Before I overwhelm you in a ton of pictures, here is a little bit about him!! His name is Pip, after Pip from the book Great Expectations that Charles Dickens wrote (our other kitty is named Charles Dickens). He was born on March 31, and is now about eight weeks old!! He is super sweet, and very playful! He is so adventurous, when we brought him home he immediately started running around and exploring!! Whenever he sleeps, he has to be cuddled in some one's arms!! It is the cutest thing!! He cuddles up so close!! Okay, here are some pictures of our Pip!! Again, isn't he the cutest? He is so sweet and cuddly and we couldn't be any more happy to have him in our family!! In a week or so, I am going to be posting a Pip Update, where I am going to share lots of pictures, his sc
Post a Comment
Read more

June 01, 2020
Happy Monday!! It is the first Monday of the month, and that means that it is time for my monthly goals!! Today I am linking up with Heather  and Lindsay for Hello Monday!!  Okay, in May I got super overwhelmed with finishing school and other things, that I did not do every single goal that I set last month, so I am not going to go over it. Also, my goals are organized by daily, weekly, and monthly just because that is easier for me to get down!  Okay here are this month's goals!! Daily: 1. Do Devotion Every Day 2. Make A Daily Checklist For Each Day 3. Brush The Dogs Everyday 4. Do Your Workout Every Day 5. Make Your Bed Every Day 6. Practice Volleyball Every Day 7. Practice Band Every Day 8. Deep Clean A Part of Your Room Every Day Until Everything Is Done 9. Read The Bible Every Day 10. Ride Work-out Bike or Go On A Run Every Day 11. Make Clara's Bed Every Day 12. Drink Water Bottle Every Day (link to water bottle HERE ) 13. Work On Blog Every Day 14. Help Clean Around Hous
1 comment
Read more
More posts 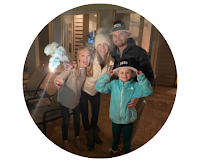